“Man I can tell you right now… it ain’t worth it.”

…That’s what Lous DeJesus said about his gorgeous Integra, in an rationally & oddly calm voice. lol.

And you know he’s lyin’. But then he’d interject and say,

“I’ll never sell it though.” he’d add with a smile.

…“Not because I don’t want to, but because my daughter won’t let me, ya know.”

Louis bought this Integra 14 years ago as a damn teenager, scheming to flip it for a quick buck. Dude STILL hasn’t sold it yet! And it’s eaten so…so…so many bucks instead of ‘making them’. I’d say something proper like “You live & you learn”… but we don’t haha. We just keep doubling down. And why wouldn’t we. Because c’mon… how perfect is this?! The car is 20 years old, and the body lines still look far more appealing than most cars coming out today.

And at 748 horsepower (yeah you read that correctly)… Loius DeJesus can STILL let the modern domestics have their pony wars… and then take ‘em all to the cleaners in a 20-year-old FWD Honda/Acura.

It never gets old.

See, when teenager-Louis decided NOT to sell this Integra, he was dreaming of building it to run 9s. But then he starting building it too nicely. And as he got older & wiser, he figured it’d be ok to run 10s & keep license plate on it with full interior & real windows. So this thing sports power windows, locks, door panels… all the modern luxuries we come to expect in our resto-ricers. He doesn’t have air conditioning or wipers, but that’s no big deal because he lives in Orlando, Florida… where it never gets hot or rains.

The car is NOT, I repeat NOT a real Type R. Louis just always wanted a Type R, however, and he thought it was the perfect car & color. He couldn’t ever think of a better color to lay on it. So if you can’t beat ‘em… join ‘em! The chassis is painted outside, inside, and underneath.

Under the hood, it’s a boosted B18. The car made 800, and was then dialed back to 748 for better manners. To get to those kind of horsepower numbers, Louis had to completely build-out the engine.

Energy Suspension bushings all the way around 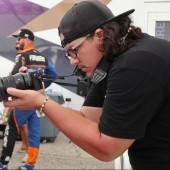