Recently, Wooley and I got the chance to drive a new NSX for the weekend. While shooting a video on that car, we realized how it’s impossible to grasp the real feelings behind the car’s unreal numbers… until you’ve had 1st-hand seat time. And frankly, for a lot of us, it’s just hard to muster up the proper amount of ‘care’ when something’s so unattainable/untouchable. It may as well be a Formula 1 car. So we put it in the back of our minds & move on with real life. Now that the R35 has started to age a little bit, their prices have begun to slide down. If you play your cards right & have patience, you can pick up an earlier model R35 for around 45k or even less depending on the mileage. Meaning, for the price of a new STI or Camaro SS, you could essentially own Godzilla… a JDM supercar with endless aftermarket support and ridiculous street cred. Not only that, but because you can get them at more reasonable prices these days, you’re not as afraid to beat & bash on them as much.

See – there’s something beautiful that happens during 2nd and/or 3rd ownership. At that point, the car’s taken the big depreciation hit… and the gloves come off! And all the people who’ve had 5-10 years to save & dream about what they’d do with that car… finally get their chance. Haha – and that’s pretty much exactly where this magazine lives. Bottom line – the R35 GT-R price-to-performance ratio cannot be ignored anymore. And if you pushed the car out of your head 8 years ago, it might be time to let it creep back in a little bit. Shaz (out of the UK) realized the opportunity, and took advantage of it. He waited… and hunted the used listings until he found EXACTLY the specs he was looking for: A 2011 R35 GT-R in Vibrant Red, at the right price, with a few aftermarket goodies already on it. The adrenaline of GT-R ownership took over… and things escalated pretty quickly. Be like Shaz. Billet baskets A and B 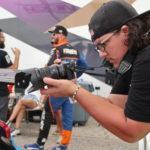