Wanna know a secret? Money can buy happiness. Yep it’s easy – go buy whatever car you want, get all the shiny go-fast parts, make a generous donation to the local PD, and haters be damned!

But the bad news is, happiness is more expensive than it used to be.

Have you seen car prices lately? At this point, the 911 bubble has floated away. Supras, RX-7s, GT-Rs? Well, they’ve always held their ground. You gotta have 35k to play, it’s as simple as that. Even 240’s, E30’s, clean Civics… they’re not getting any cheaper. This is the beginning of ‘used cars’ becoming an asset.

Which is a good thing. It means we’re winning. It means our corner of automotive culture is growing in prominence and worth… as it grows up.

But what if you want to use those cars as they were intended?

Look – in reality, you don’t need much to drift. RWD, decent power, lightweight… and then modify it as you can. So in theory, 90’s Japanese pickups are perfect.

Alec owns this truck, but before it was his, it belonged to his dad. His dad bought the truck new in ’86. When Alec turned 16, he was looking for a first car that could haul his dirt bikes, but his dad had already sold the truck to a friend. Long story short, they tracked the friend back down, and Alec bought it back. It was tinkered with in high school and later, they put a V8 in it. But his first experience at a drift event ultimately led to the iteration you see now.

Parts for building drift trucks don’t just fall from the sky, so 100% of the fabrication work, plumbing, suspension geometry, etc. had to be done by trial & error. Alec took this as a learning opportunity, and started to get his hands dirty with fabrication, wiring, and suspension dynamics.

The truck has been through many versions, improvements, & do-overs… but his current setup has quickly proven to hit some sort of sweet-spot. Proof? Alec is currently BOTH a rookie AND tied for points-leader in Midwest Drift Union.

The motor is an LS2 block, with a truck intake, LS7 injectors, LS9 cam & valve springs… with a custom exhaust, and OEM GM truck ECU tuned by KLtunes. Its hooked to a T56 tranny with an LS7 clutch/flywheel & Wilwood slave cylinder with remote bleeder. The rear end is a Dana 44 from a Honda Passport; 4:10 gears.

To stay cool sideways, the engine is using a rear mounted radiator setup. Copper piping runs from the radiator, under cab to the engine. There are also dual steam ports and an expansion tank under the hood.

Alec is currently BOTH a rookie AND tied for points-leader in Midwest Drift Union.

Most of the braking system is surprisingly stock, with OEM D21 2-piston front calipers & rotors. The truck sports rear disc brakes with a custom dual-caliper-per-rotor setup that uses factory single-piston front truck calipers as designated handbrake calipers. It’s got a factory master cylinder with all stainless/braided lines throughout.

Chassis-wise, Alec built the roll cage himself. The frame is fully-boxed, back to the axle. There is a 2-inch mini frame notch over the rear axle. The RCI aluminum fuel cell has custom-built mounts, and Alec also fabbed up a custom rear quick-jack point. The truck has a tube front end, that ties back to the main cage which also doubles as coilover mounts.

Body-wise, the 2wd Hardbody is now using 4×4 Hardbody front fenders – radiused and flared. The bed-sides have also been radiused and flared to match. Wheels are Cragar Soft 8’s – 17×8 up front, and 17×9 in the rear. The gas door was shaved, and the tailgate-handle was relocated. The truck has a shaved antenna, and shaved roof lines as well. Alec’s running a custom aluminum spoiler in back, and a custom grill and front bash bar up front. He raised & widened the wheel tubs in the bed, gutted the doors inside, and made a custom transmission tunnel for the T56 tranny. The truck has a 1.5” body drop. It’s got custom lexan windows, that have been tinted by Perfect Shade. Finally – the thing is wrapped by DivisionSixx.

And it’s got a fuck-ton of underglow.

This truck took a lot of work. A huge amount actually. But when you put all the pieces together, it’s not a big dollar build. Alec didn’t go the big-money way, but he did go a smart way and you can too. It just takes some time & ingenuity… which at the grassroots level, can help you humble bigger budgets.

So when it comes down to it, STOP WORRYING AND START WRENCHING. Car values will always go up, especially our dream cars. But if you want to get out there and build something fun & fast… there’ll always something cheaper, better, rattier, and ready for abuse. You’ve just gotta get clever. 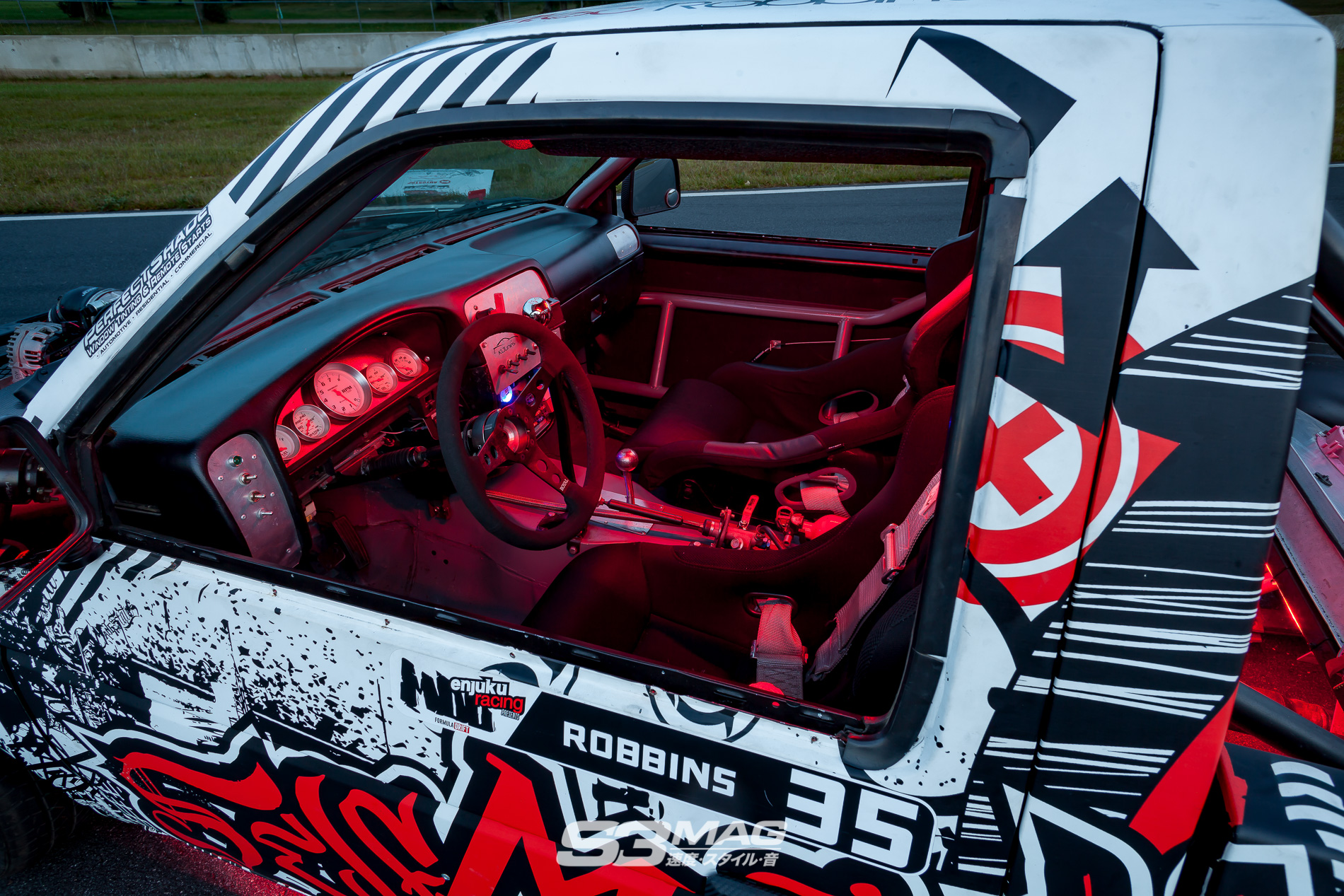 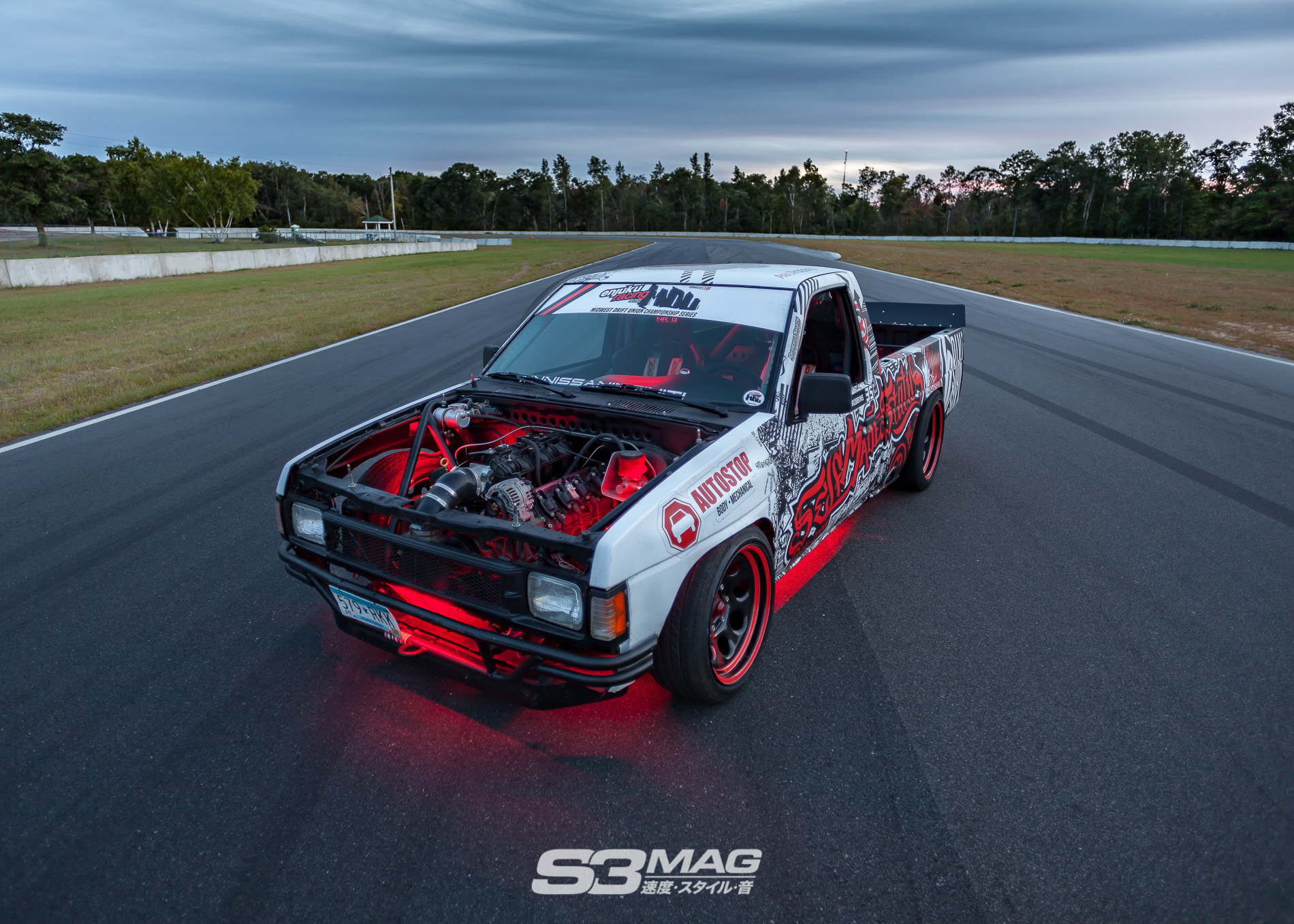 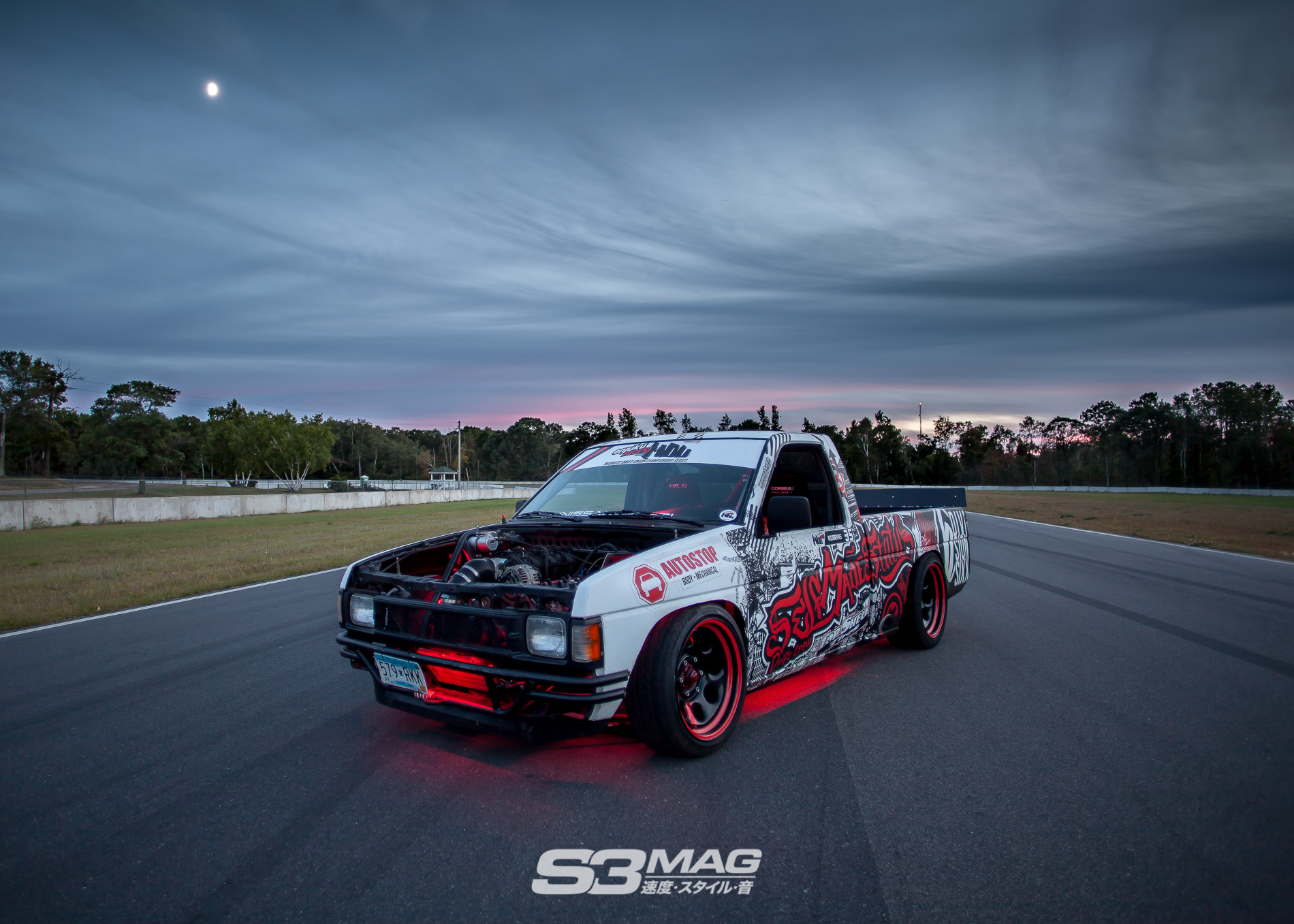 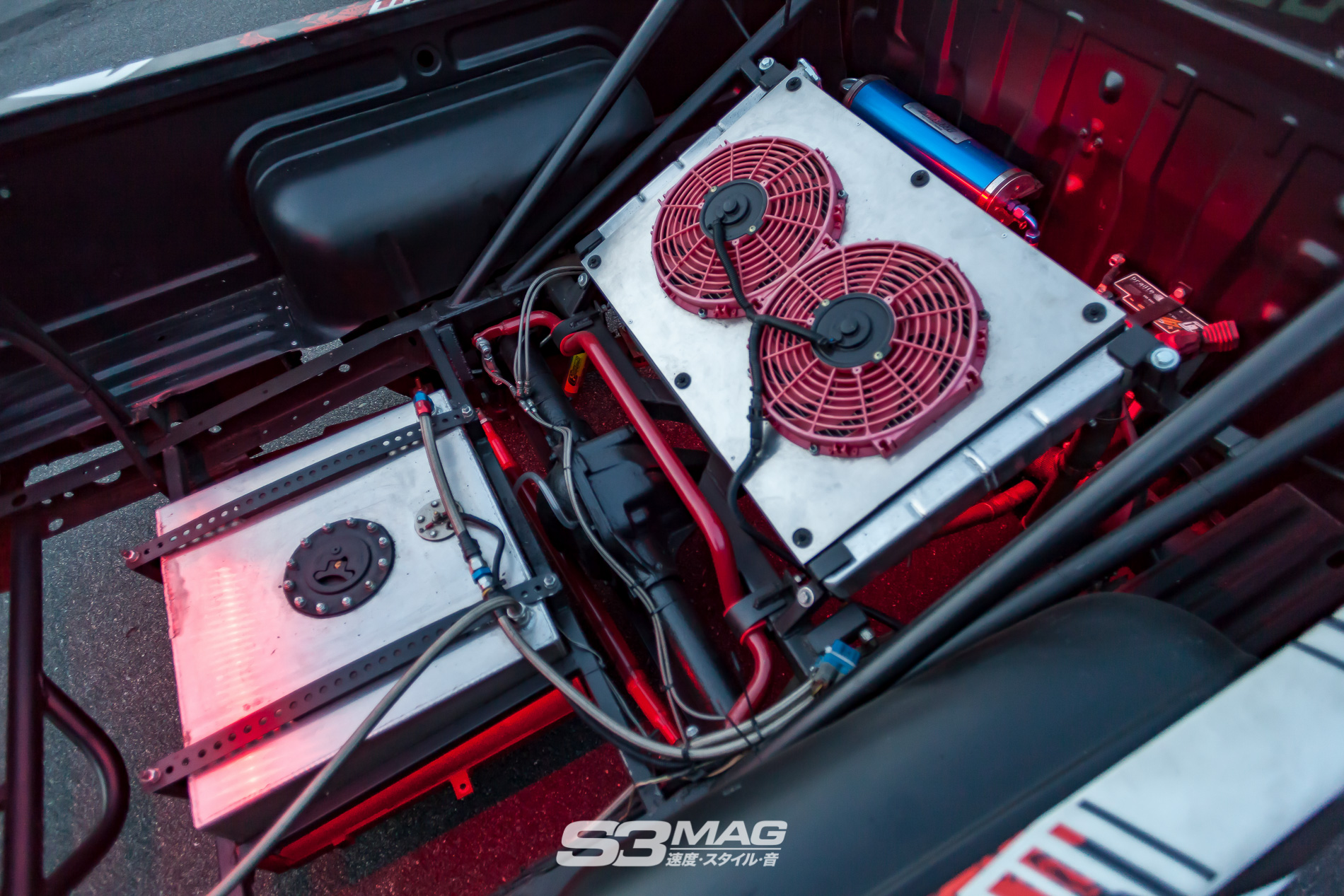 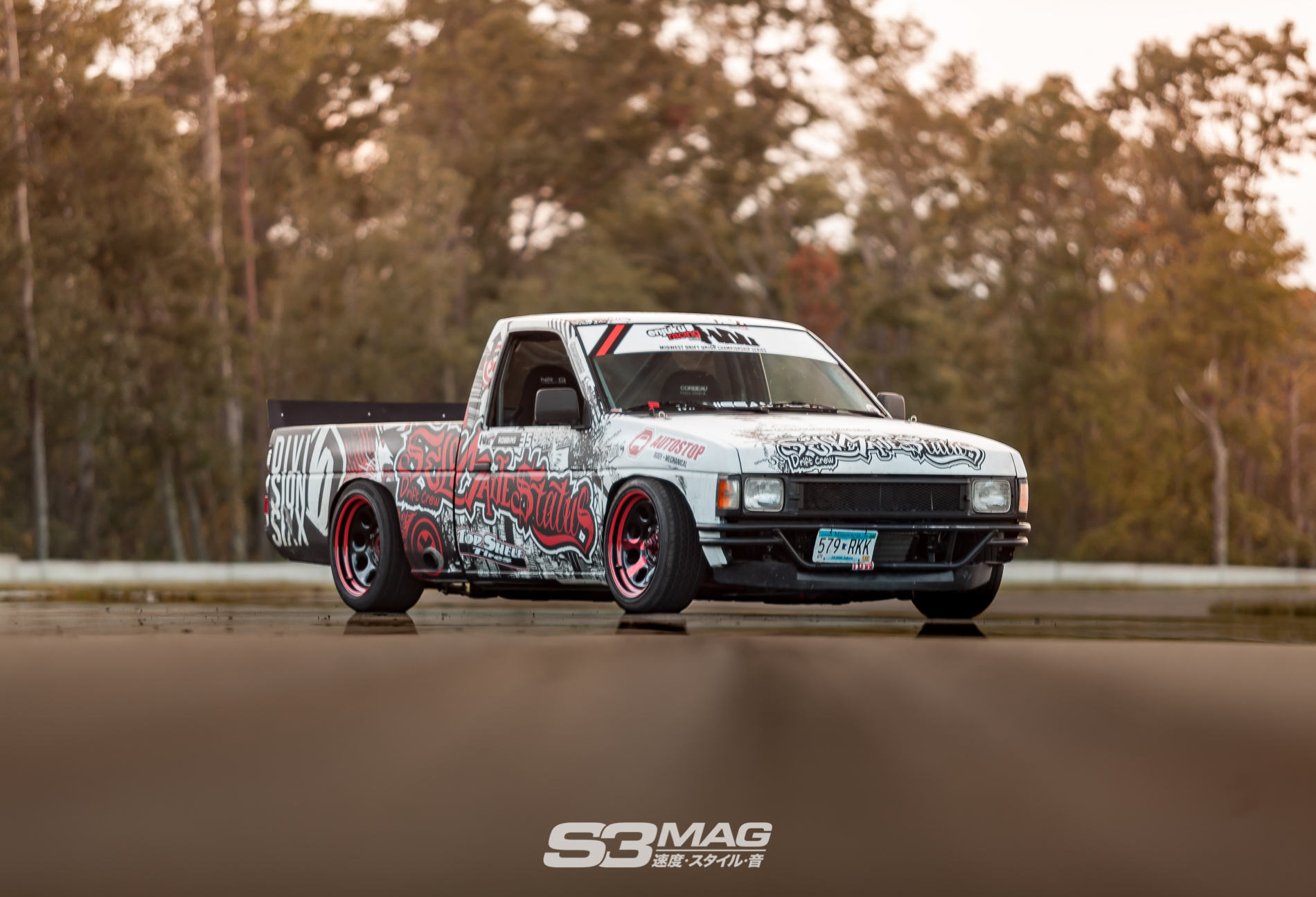