Be warned: This is some ‘Talladega Nights’ sh*t right here. And I mean that in the best worst way.  Let me try & set the stage:

It was a late summer afternoon in 1975 when young Jeff Ross brought home his new Datsun 280z. It was the first new car he ever bought! He worked all that summer to save money for it. Prospects were high! It was just Jeff, his girl, his new Datsun 280z, a 12-pack of Busch, and nothing else but open horizon & opportunity. But only 5 years later, the engine in that little cherry 280 blew up like a cheap gas station firecracker… So Jeff did what any red-blooded American would do, and ripped that little Japanese turd out for a small block 350…

Boy did that kitten purr! It practically pulled the front wheels off the ground! Jeff used to tape a hundred dollar bill on the dash next to his pack of Camels; if the passenger could grab the bill they could have it. No one ever got that hundred bucks. The local police knew the car, they thought it was a Porsche maybe. But they never got close enough to find out.

Then – in 1989 – Jeff & his gal became expecting of a boy. His name would be Jesse… after Jesse James of course. Jeff did what any stand-up man would do, and sold the Datsun to settle down & focus on the joys of raisin’ a son. He piddled with this & that around the house. But as that boy Jesse grew, Jeff desired to build another sports car of some sort. He done looked through the paper, and low & behold found another Datsun for sale a couple towns over. He put Jesse in the station wagon & went to scope it out. When they pulled up, all young Jesse saw was a bucket of rust…

But as his dad paced around the Datsun overgrown out in that field, Jesse saw his dad begin to get a little emotional. This wasn’t just another Datsun he’d found… this was THE DATSUN!

HIS DATSUN from a decade earlier!

Goes without saying – he bought back his old car on the spot & they drug it home. The roof was rippled from a decade of 350 torque-twist. The subframe was so rusted & busted, that it basically fell out of the car. But Jesse & his dad kind of bonded over this Datsun garage project. They got it all fixed, built back up, and running again with a new built 350.

And that first time Jesse sat in that passenger seat while dad hit the throttle & the front wheels popped off the ground – it all made sense. He understood.

Jesse learned the value of hard work over this car. The thrill of American muscle. It wasn’t even so much about finishing the build… as it was about… the journey of a boy maturing into a man, and coming to a mind-shared understanding & admiration for his father. The car was in & out of running order, with some engine failures. 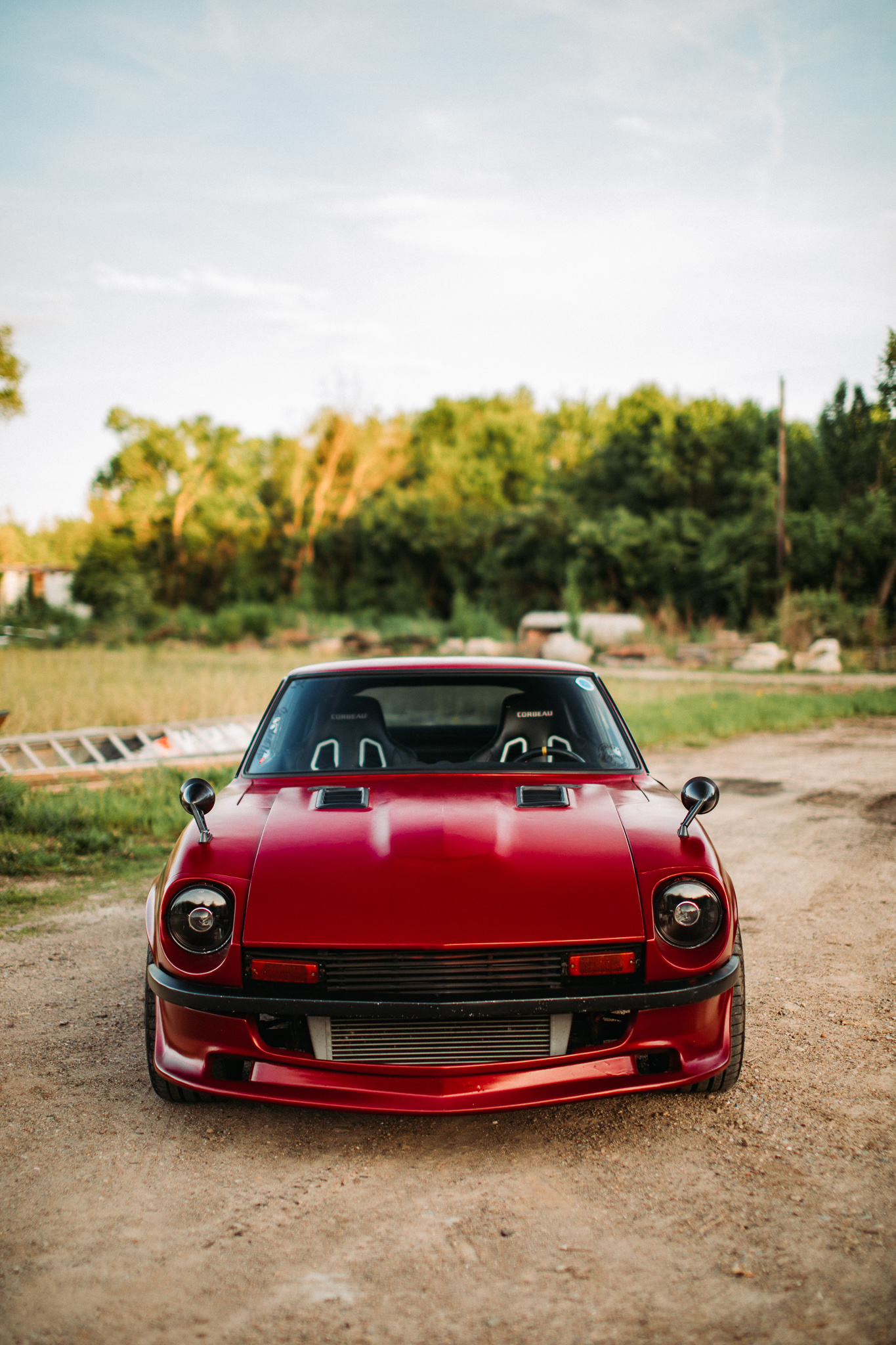 Jesse’s dad was diagnosed with cancer. The kind you don’t beat.

As Jeff came to terms with his own end, he wanted to leave Jesse something real & tangible… not an unfinished pipe dream. He told Jesse,

“Now look son I know it ain’t much, and I wish I could have done better for you. But it’s important to me as your dad, that we finish that damn car. I know it’s silly… but I want you to have that piece of me to remember. Something to pass down to your own children. Son let’s get that Datsun running again.” Jesse leaned in with a warm heart & said…

“Dad, please don’t worry about that! Working on that Datsun is some of the best times I ever had with you. But I want you to focus on getting better because we’re gonna beat this thing dad! Besides – I was kinda toying with the idea of just sticking a Skyline engine in it.” Jeff pulled his son in & said…

Jeff then ran down to the garage, grabbed a pic axe, smashed the windshield with it… and drove a hole through the Datsun’s hood. To which Jesse followed yelling, “Oh OHHH that’s great dad! You feel better now dad?! I’m still gonna do it! Whatcha gonna do about it dad?!!” Jeff passed away God rest his soul, and Jesse bought a Nissan RB25det…

And 5 looong years later, right before the new RB engine was about to go in the swapped Datsun 280z, Jesse stopped his buddies at the engine hoist, “WAAAIT!!”

Jesse went upstairs, took the urn containing his dad’s ashes, and set it on the garage floor under the Datsun’s engine bay. That way the new RB would literally go in ‘over his dad’s dead body’. And Jesse’s savagery resulted in immediate ghostly karma. Because at that very moment, the lights flickered, and the build began to snowball. The car wouldn’t run. And when it finally did run, it started breaking… in places that a car wouldn’t normally break at all… unless of course there was a pissed off ghost behind the curtain. Jesse went through two RB engines in a very short time… one while on 1320 video racing Mikie Sorrell’s Starion. Then this photoshoot happened real quick, then this engine blew up about a week later. About at which point Jesse said, “Goddamnit dad FINE… YOU WIN!!” Jesse pulled the cursed RB25 out, and built a turbocharged 5.3 LS to go in… just like dad always wanted!

We’re featuring this swapped Datsun 280Z in RB form to celebrate Jesse’s coming of age… but to also say… “Don’t f*ck with your dad’s hotrod boy.”