When Is Enough, Enough?

You lie on your back by yourself. Staring up at that transmission that won’t rotate 1/8th of an inch to go in. You’re debating about why you shouldn’t set this car on fire. Why didn’t you take this to a shop to let it be their problem? At the same time… you notice all the intricacies of the floor you’re lying on. And you think to yourself – what motivates the car enthusiast to stick around with that claptrap in the driveway? Keep funneling money into a black hole? When will we say enough is enough?

Captured By NVUS Images at Road ATL in 2017

It’s worth the sacrifice.

I’ve owned my S2000 for almost ten years now. I bought it to be a dual-purpose street and autocross car. Then I immediately started tracking… and things escalated quickly. I mean, it’s had a wheel fly off on the track, multiple roll cages, blown-up engines, and two different engine swaps. We have experienced our fair share of thrashing all night before an event. Safe to say that my ideology of a clean street car that I autocrossed went out the window. Nevertheless, it was time to regain focus. So even with a few hiccups, enough was still not enough. It’s an S2000 after all. A dream car of mine. It’s worth the sacrifice… right?

Things like that help you develop who you are as a car enthusiast. Are you one to throw in the towel and buy something faster? Nothing wrong with that. Hell – it’s probably the more brilliant option. Is tracking even for you at this point? It sure seems expensive.

My S2000 helped solidify that I wanted to go fast… so fast that I would be the fastest S2000 in Timeattack. A new goal, Northstar, was now in my sights. My peers would whisper my name on the forums. I would get all the accolades & I would feel like I was awesome. Then and only then will I stop modifying and settle down on being the record-setting hero that I am.

I want to let you know that, overall, no one cares. That’s right – that championship you’re chasing, that lap record, that sub 1:40 at Gingerman Raceway?? No one cares. In fact, let’s experiment. Who won the championship in the class you raced in two years ago? How about the class your buddy races in? Who set the track record around Gingerman in Unlimited RWD? Don’t Google it. No one cares. So you better make sure you’re doing it for you. If not, it’s just an expensive way to get a sub-$100 trophy and put ‘racecar driver’ in your Facebook bio.

We Invest The One Resource We Can’t Get Back…

How about slamming your car just to break the internet? The same internet that will forget what you’re doing, one aimless scroll at a time. Sliding at USAIR with your homies in your claptrap IS300. That same one you love for that moment… but despise every other time. Street, show, drift, track… it all circles back to one thing. That got-damn car. We invest the one resource we can’t get back into them: Time. That’s not all, though. We also offer up a finite resource, which is money. Doesn’t that just sound somewhat dumb?

Sometimes you must stop, look at that thing, and reevaluate life. Take the time to think, what the actual f*** am I doing? What keeps me doing this? If there was no one else in the world to witness me, would I still be doing this? That’s for you to answer. But for me, the answer is a resounding capital HELL YEAH. I’m not going to give you the cliche of “it’s freedom” or some line about how it makes me happy inside to work on my car. It’s work… a job I don’t get paid for. Sometimes you have to be honest with yourself. You just like doing it, don’t you? Look at your stupid face smiling right now. I just told you about how dumb this is… and you smiling. You stay because some thought or memory of something keeps you around. The friends you made with a shared passion. Talking to whoever will listen about how a Miata is the best car in the world.

First time racing against pops. Back when I owned a SR 240sx and he owned a turbo Miata.

Shut Up And Enjoy The Moment…

Remember I said holding that trophy was dumb? It still is, but it’s a symbol that you accomplished something you said you wanted to… and conquered hurdles to do so. It’s more of a sign that I will have a forever-memory of today, and I experienced it with all these fine idiots around me. A couple of close friends talk to me about their almost record-breaking lap in a shithole city called Button Willow. They get goosebumps when they talk to me about it. Do I care about the lap? Absolutely not, but I love the emotions they go through when they recite it. So I shut up and enjoy the moment with them.

When Is Enough, Enough?

For most of us, it’s never enough. It’s an endless march. More cars need to be built, more records need to fall, more tires can be slayed, and more frames need to be scrapped. What I’m saying is… it’s okay to be dumb. Embrace it, and find that motivation inside to keep going. Do it at your own pace, and enjoy the journey. Even if you are a bought not built guy, the journey is still there, just down a different path. As I said before, we don’t get time back. So make the moments memorable… however that translates best for you. For the few that have made it this far, this whole ‘car thing’ may not be for you, and that’s ok. We need rational people in the world. But quick question, can I buy your project car for cheap? My contact info is below. 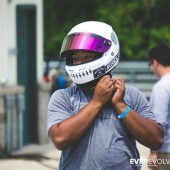