There’s an extra level of sport in ‘doing things with a vehicle’ that it was never supposed to do. Auto-crossing a Mazda Miata is fun no doubt. But auto-crossing a ’68 Ford truck is… much more erratic. Like taking the brakes off your bike to save a little weight, or surfing with raw meat strapped to your board. Or chopping down a tree blindfolded. You get the point… man stuff.

But if you’re gonna do it, you can’t go into it all willy-nilly. You gotta have a plan kind of. Some forethought maybe. This is Corey VanBruggen’s 1968 Ford F100. 2wd Fords trucks of generations-past have an ‘i-beam’ front suspension setup. If you’re not familiar: Instead of regular independent-front-suspension (IFS), the i-beams are essentially 2 beams that pivot from a center location under the truck, one extending out to the driver’s wheel/hub, and the other going to the passenger’s. They’re perfectly fine on a stock truck, but they’re a bit limiting when it comes to performance. So for that reason, Corey swapped to a Ford Crown Victoria subframe under his ’68 F100.

To do that, Corey first torched-out the original front crossmember. Then he put the Crown Vic subframe on wheels/tires, rolled it under the truck, and centered it in the wheel-wells. He took all his necessary measurements & cross-measurements to make sure everything was square. Once it was square, he marked the frame & box-welded the frame of the truck where it was to meet & mount with the subframe, AND he further strengthened it with steel tubes that the mounting bolts slide through. So the main chunk of the subframe mounts with 4 heavy duty bolts in this manner (2 driver & 2 passenger). This is from just behind the radiator looking at the frame on the passenger side. Corey boxed the frame and added steel tubes to support where the bolts go through.

Corey then welded 2 brackets that extend off the frame rails of the truck (driver & passenger side), each having 3-bolt mounting points for the back of each a-arm. Corey fabricated this bracket to mount the rear of the lower control arms.

With the new IFS subframe in place, Corey was now able to run performance-oriented parts, like a swaybar from ADTR, and coilovers from Andrew’s Tuning & Performance (which are Viking coilovers with custom mounts). And unlike i-beams, he now has the ability to adjust camber for the lowered ride height. This is between the subframe & the frame of the truck on the front end. There’s a little gap on both sides, which is enough to run fuel lines & brake lines through.

It works pretty well. But Andrew’s Tuning & Performance also makes a kit to adapt a Wilwood big brake kit over the Crown Vic, so that is in Corey’s not-too-distant-future plans. In the back, Ford F100s come with standard leaf-springs & a solid rear axle.

But Corey swapped to a ’97 Thunderbird subframe with independent rear suspension.

There’s a company called Team 321 that makes mounts for the new subframe to go in the F100. This is in front of the driver’s rear wheel. The extrusion from the frame is a mounting bracket from the Team 321 conversion kit.

You have to weld them in… which means Corey needed to cut/torch-out the OEM leaf-spring mounts out of the truck. He positioned the new T-Bird rear subframe, measured thrice, and welded in the new Team 321 brackets. At that point, the subframe bolts right up. This is from behind the rear driver’s wheel, showing the spring cup and rear subframe mount extrusion from Team 321. Corey had to chop a part of the frame out, boxed it on the inside and added an additional cross member across the frame behind the subframe.

It’s worth mentioning that Corey also boxed the rear frame & also welded in a cross-brace between the frame rails at the rear end, just to strengthen the chassis. 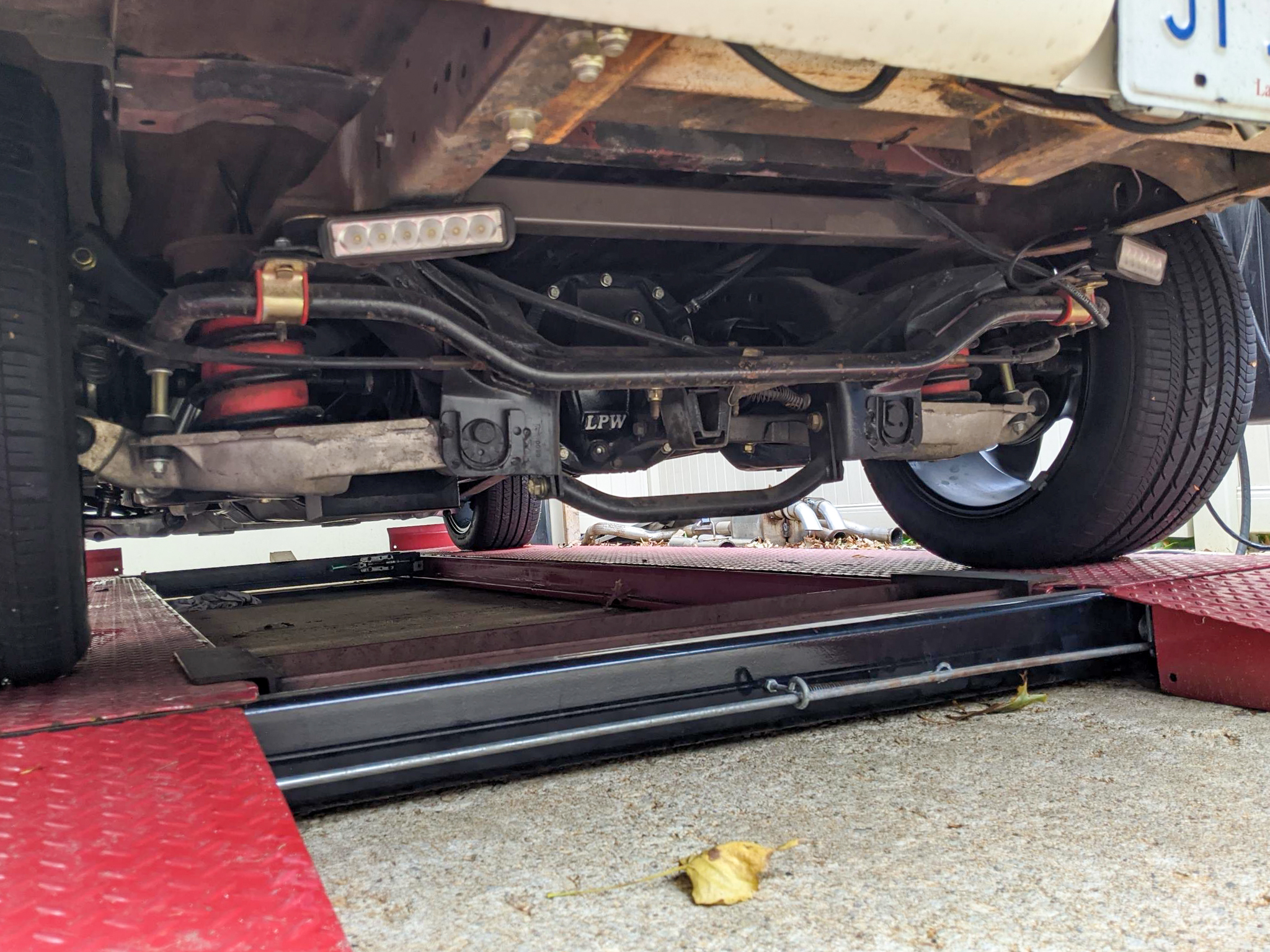 Here is the cross-brace between the frame rails. The engine is a 302 from a 1991 Mustang. It’s got a rebuilt stock bottom-end, blueprinted head, and Howard’s cam. Bolt-ons include an Edelbrock manifold, Holley Sniper EFI, and Holley Hyperspark ignition. The transmission is a Tremec TKO 500 5-speed with a Detroit Truetrac diff & 4.10 gearing. 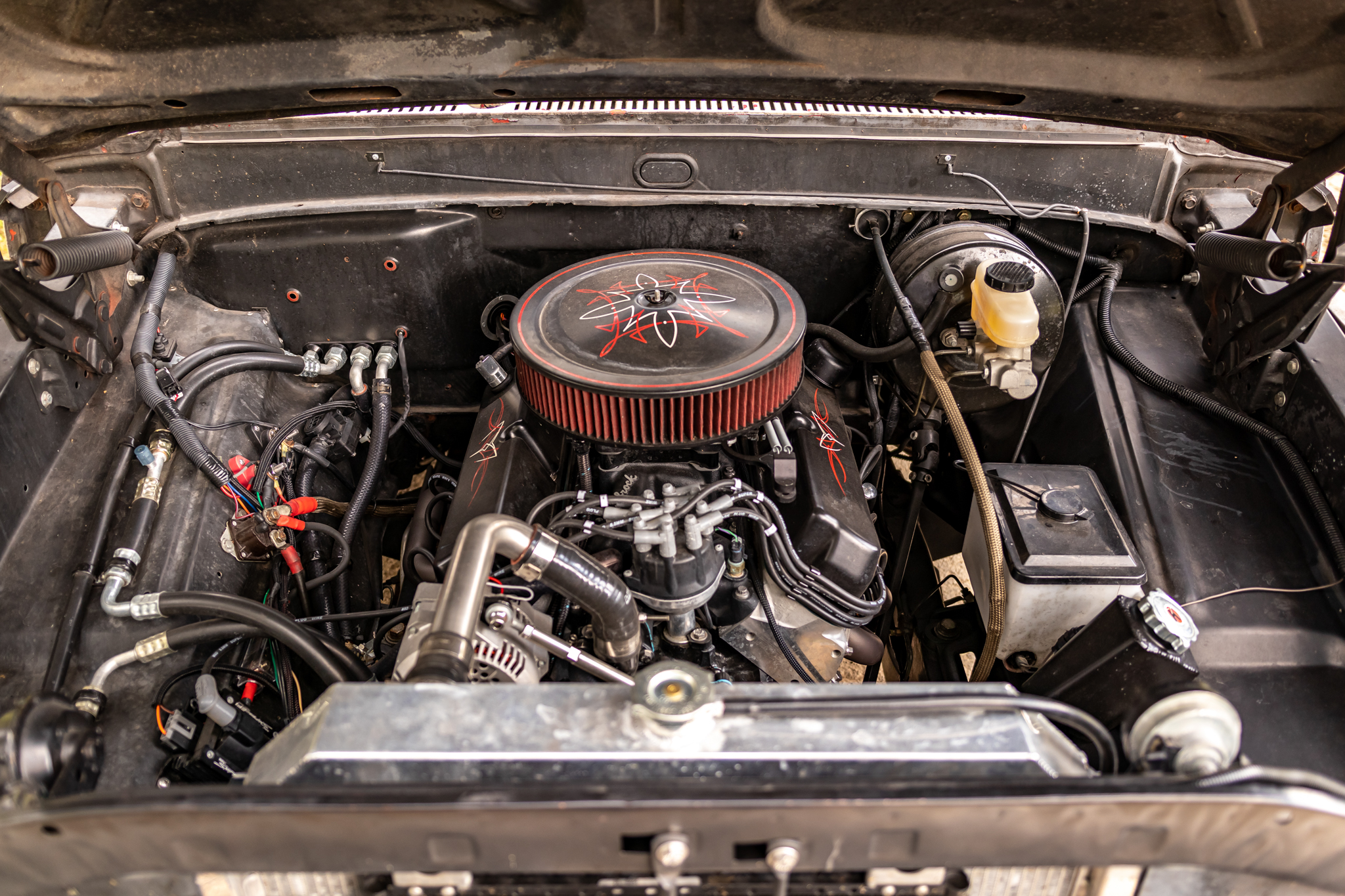